"The CNIPA's (China National Intellectual Property Administration) first batch of patent enforcement rulings shows it's more than capable of handling technical cases,"  the UK-based Managing IP magazine leads with this sentence in an article of its August edition.

The article highlights some of the impacts on the IP community made by this new mission of the CNIPA. One of them is "The latest rulings also show the CNIPA won't shy away from industry issues. For example, the office settled a longstanding problem in the drug patent litigation space."

Since the CNIPA started hearing patent disputes with a significant nationwide effect on June 1, 2021, it has concluded the first batch of patent infringement cases within four months (not inclusive of staying time). "These rulings epitomize the efficiency of patent administrative protection, presenting fresh options for patentees and the general public to enforce their  lawful right and stop infringement in a timely fashion," says Zhang Zhicheng, director general of CNIPA's IP protection department.

The amended Chinese Patent Law came into effect on June 1, 2021. The newly-added Article 70.1 provides that the patent administrative department of the State Council may handle patent infringement disputes that have a significant nationwide impact at the request of the patentee or interested party, vesting a centralized power of handling major patent infringement disputes to CNIPA from the legislative level.

"Our office took execution of this authority very seriously and immediately formulated relevant norms and protocols with an aim to make full play of the quickness of administrative adjudication and our technical strength and eventually defend the right and interest of patentees in a timely manner, " says Zhang.

One of the major norm-setting tasks is drafting and implementation of the Measures for Administrative Adjudication of Major Patent Infringement Disputes. Even back during the days of the amendment of the patent law, the CNIPA researched intensively on building a specific system of trying patent infringement dispute while taking into account of previous experiences of local IP administrations. The Measures was then shaped and became effective on June 1, 2021.

Recently, the CNIPA handed out decision on two cases, both involving infringement of patent No.ZL201510299950.3, owned by the Germany-based Boehringer-Ingelheim. After deliberating on whether the cases were admissible as major patent disputes, whether the pharmaceuticals in question listed on the internet in multiple provinces (autonomous regions and/or municipalities) fell into on offer for sale or exception to infringement prescribed in the patent law, and some other central issues, CNIPA made a ruling within the required time limit.

"The trials of the first batch of cases brought attention to difficult problems in IP protection, wasted no time in making decisions that awarded remedies similar to injunctions. The CNIPA's technical background played no small part in accomplishing all these. It is safe to say the real efficiency shown by our administrative protection has made us popular universally," says Zhang.

Administrative adjudication of patent infringement disputes, as one of the major ways in patent administration protection, has been proven to be efficient, cheap and transparent in procedures. The resolution of these cases tests our established system and in return, gives fresh "samples" for refining the system.

According to Zhang, these case may have set templates in many aspects of hearing major patent disputes, like opening a case, oral hearing procedure, conditions for staying cases, enforcement and disclosure, which will certainly have a strong bearing on future trials of similar cases.

The high efficiency of trial and transparent procedure impresses the patentees involved. "At any stage of the trial, whether case-opening or hearing, the adjudicators emanated technical prowess and efficiency. The verdict orders the infringers to cease all infringing acts immediately, effective nationwide, which shows the meaningful strength of administrative rulings, defends us patentees' lawful right and regulates the market order."  comments a Boehringer-Ingelheim executive.

"In our planned next steps, with attention, precision and pursuit of excellence, we will resolve a series of cases that may become typical examples and spark interest, which will consequently deter infringing acts. In parallel, we have to upgrade our own skills in trying these cases, advocating the establishment of a system that brings technical investigation officers into play, improving checking and verification systems and ramping up technical support for trying these cases," at the end of the interview, Zhang looks into the future. "China will weave a tighter and sturdier IP protection network, advance inter-agency coordination, uphold a market order of fair competition and secure a climate for innovators and businesses to fly." 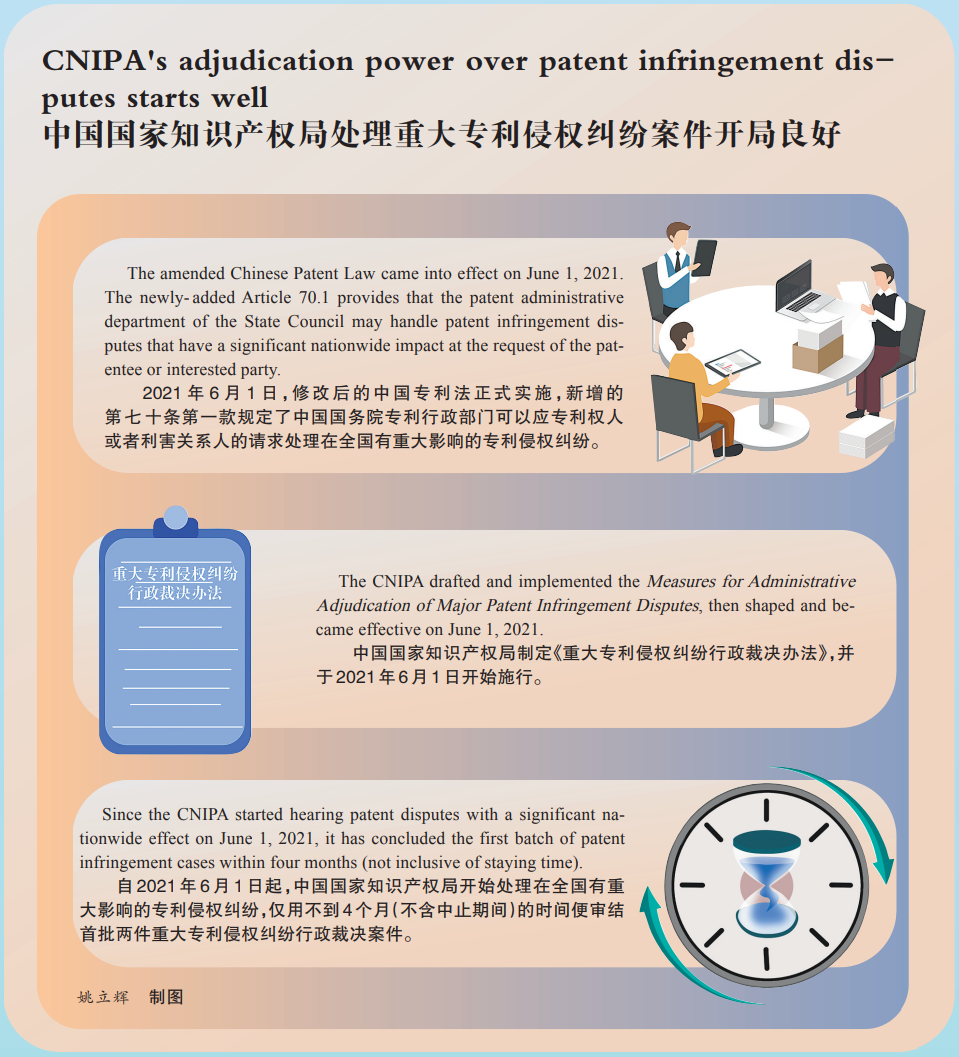